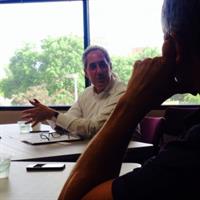 On Monday, June 23rd, United States Trade Representative Michael Froman came to the Boulder Chamber of Commerce to meet with small business leaders that are creating jobs in Colorado by exporting their Made-in-America products around the world. The business leaders included executives from the outdoor apparel and footwear, green technology, and other innovative industries contributing to Colorado’s record-breaking $8.7 of exports in 2013.

Ambassador Froman underscored that the Obama Administration is working day-and-night to help unlock opportunity for small businesses across Colorado and the United States by realizing ambitious, 21st Century trade agreements like the Trans-Pacific Partnership and the Transatlantic Trade and Investment Partnership, which will help make the United States the investment platform of choice for the world and bolster the ability of innovative businesses to create jobs in Colorado.

“Last year, Colorado and the United States sold a record-breaking amount of Made-in-America exports to the world,” said Ambassador Froman.  “We believe we can do even better, and our goal is to harness the power of exports to help unlock additional opportunity for all Americans.  Colorado is a state that gets it, and through President Obama’s trade agenda we’re fighting to help small businesses yours expand and create jobs by selling more of your innovative goods and services across the world.”

The discussion was arranged by Congressman Jared Polis (CO-2), who called-in to give remarks at the beginning of the meeting.  “Our trade policy should reflect our values and benefit our community,” said Congressman Polis.

Nearly 5,600 companies exported from Colorado in 2012. Of those, over 87 percent were small and medium sized enterprises with fewer than 500 employees. “Monday’s meeting was a great opportunity for outdoor industry business leaders to discuss with the ambassador opportunities and challenges in the president’s trade agenda,” said Frank Hugelmeyer, President and CEO of the Outdoor Industry Association, “we were honored to attend and we are grateful to Ambassador Froman and Congressman Polis for the opportunity.”

Ambassador Froman leads the Obama Administration’s work to open global markets for U.S. goods and services. He answered questions on trade issues ranging from how the Office of the U.S. Trade Representative is working to raise labor and environmental standards, U.S. intellectual property protections, and provisions of the Foreign Corrupt Practices Act relevant to small businesses who export.

Key initiatives for the U.S. Trade Representative include negotiations of the Trans-Pacific Partnership Agreement in the Asia Pacific; the Transatlantic Trade and Investment Partnership Agreement with the European Union; services, environmental goods, information technology, and trade facilitation negotiations in the World Trade Organization; and monitoring and enforcement of U.S. trade rights.